Back at Union Glacier...

After a celebratory night (that lasted into the wee hours of the morning!) the team flew back to Union Glacier today. The relative warmth of Union Glacier's southern latitude (almost 700 miles south of the Pole!) was a welcome change from the downright cold conditions at the South Pole.


The team enjoyed a celebratory dinner and good companionship with the many other adventurers at Union Glacier including our South Pole Last Degree ski team.


The weather is good and they will take advantage of this window to fly by returning to Punta Arenas tomorrow. We will update the blog again tomorrow, so make sure to check back again!

Hooray! Today the South Pole Flight team arrived at the South Pole. The weather was beautiful with a blue sky, full sun and little wind. The 20k ski team, who arrived yesterday, spent the night at their drop off point 20 kilometers from the South Pole and managed to ski the entire distance back in only seven hours! The temperature today was around -28 degrees C. After everyone had arrived the team was given a tour of the Amundsen South Pole Station which is home to over 200 hundred scientists and support staff every summer. Roughly 40 hearty people remain for the winter "night".
﻿
﻿
The team spent time at both the ceremonial South Pole and the Geographical South Pole (they are very close together). The Ceremonial South Pole is a red and white barber-style pole with a reflective globe on top. It is what most people take a picture with when they are at the South Pole. However it is not located at 90 degrees south. Depending on the occasion it is 30-100 feet away from the Geographical South Pole. You can read more about the Geographical South Pole towards the end of the blog.
When we spoke with them the team was getting ready to watch a South Pole cricket match (UK vs. the rest of the world). At 6 PM local time (that's 2 AM for our team who are on Punta Arenas time) the official ceremony commemorating Scott's arrival at the South Pole will take place.
More about the Geographical South Pole...
Every New Year's day a team of surveyors from the United States Geological Survey locate ninety degrees South with precision. They fix the spot with a metal pole topped with a special sculpted marker, roughly 8 inches in diameter. Each marker is... "designed, selected and machined by the handful of hardy souls who keep the scientific enterprise operating during the six months of cold, darkness and total isolation that are the hallmarks of a polar winter."
This year's markers (there are two!) commemorate both Amundsen's and Scott's historic expeditions during the "Heroic Age" of Antarctic exploration.
﻿﻿ ﻿﻿
About this time next year these markers will be roughly 10 meters from the "new" South Pole marker freshly placed at 90 degrees South. That's how fast the ice is moving north towards the ocean.

Today, with overcast weather preventing a flight to the Pole, the team explored the area around Union Glacier. They climbed up a nearby mountain named ".942" with an elevation of 900m. From close to the top they slid down making a quick and joyful descent. They also created an igloo large enough to hold ten people. In the evening the basecamp hosted the 2012 International Dance Party (and you thought they were "roughing it"). The dance party featured favorite dance music, lights and participants from around the world showing off their best moves. They hope to fly to the Pole either tomorrow or early on the 16th. In the meantime they are enjoying great food and comfortable accommodations at the Union Glacier Basecamp.

Make sure to listen to Melissa's audio update and check back again tomorrow for another update from the team!

A day at Union Glacier basecamp...

Today the team spent the day at the Union Glacier basecamp. Barry, Hans and Oskar went for a ski while Melissa and Fiona enjoyed the comforts of the basecamp. The weather is improving and the planes are on the go again, at least for the time being. With some luck they may fly South to the Pole tomorrow.
Make sure to listen to Barry's audio update and check back again tomorrow for another update from the team!
Posted by . at 8:14 PM No comments:

For the last couple of days the team has been assembled in Punta Arenas, Chile awaiting their flight to Antarctica. We received word that they flew last night, a good 10 hours earlier than expected due to approaching weather, and they arrived in Antarctica very early this morning.

What is it like to get off the plane in Antarctica? The first thing you would notice is that it is bright. This is because everything is white (of course) and the reflection of the light and the sun's UV rays is bouncing off everything, bombarding your eyes from all angles. It's so bright and there is so much UV exposure in Antarctica, that you need to wear sunglasses or goggles all the time. A few minutes without eye protection and you can experience mild snow blindness. More than a few minutes without eye protection and you could be down right miserable! The next thing you will notice is that it is, slippery! Not everywhere of course, but when you step off the plane you are standing on an ice runway and there is very little traction until you get off the runway. As silly as it sounds people are instructed to shuffle their way off the runway, very slowly, to avoid slipping.

Of course there's also the crisp Antarctic air and the wind that seems perpetual. But on rare occasions when the sun is beaming down though a cloudless sky and the wind is nowhere to be found it can seem like springtime in the Rockies. This is NOT the case further South near the Pole, where even on the warmest days it is still darn right "frEEZING!"

When the team woke up later in the morning the weather had fully closed in. They had a tour of the basecamp, a nice dinner, and when we spoke with them they were enjoying a slide show about Amundsen's South Pole expedition.

Make sure to Listen to Melissa's audio update and check back in again for more details from the team!

Welcome! We are delighted to have you reading our Scott Centennial South Pole Expedition blog. As you read this our team is busy making final preparations for the upcoming expedition. Gear and food has been sent from PolarExplorer's HQ in the USA to Punta Arenas, Chile, the initial starting point of the expedition. The team will begin assembling there on January 10, 2012 before departing for Antarctica on January 12, 2012.

We will be updating this blog on a daily basis starting January 10, 2012. One of the best features of this blog is to have you, the reader, send our team questions during their expedition. We will forward these questions to them during our daily contact, and post their answers on the blog. This is fun for everyone, so don't hesitate to join in the adventure!

Check back soon for another update!
Posted by . at 11:59 AM No comments:

Send us your Questions!

Email your expedition questions here. We'll send your question to the team and post their response on the blog! 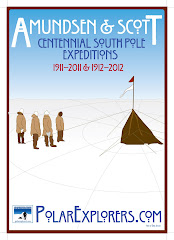 .
PolarExplorers is a premier polar guiding company helping individuals and groups from around the world achieve their dreams of standing at the North Pole, South Pole, crossing Greenland, or exploring other exotic destinations in the Arctic and Antarctic. Visit us at online at www.polarexplorers.com